21st Kołłątaj Secondary School in Warsaw is a state school. Ochota Municipal Council of Warsaw is the governing authority of the school. Since 2009 Joanna Stocka has been the headmistress of the school. The school is located at the small Metrykantów Street near Banacha Street but since 1990, the official address has been Grójecka Street.

1A with extended mathematics and physics. Graduates of this class profile can choose technical, the exact sciences and economic studies, for instance: Warsaw Technical University, Warsaw School of Economics, Military University of Technology (WAT) as well as exact studies at Warsaw University.

1D with extended biology and chemistry. With high ranking end of the school examination scores graduates take up studying medicine and pharmacology as well as natural sciences at Warsaw University of Life Sciences (SGGW).

1F with extended Polish, history and social studies. This profile is intended for humanists who would like to excel in writing, journalism and political studies. During the three years of studies there are also classes in rhetoric and journalism. This profile prepares for studies such as law, political science, social science, journalism, history, international relations, psychology, pedagogy, Polish philology, European studies, culture studies, film studies, and other humanistic studies. Class under the auspices of Warsaw Academy of Computer Science, Management and Administration.

School in the past

The school has been continuing the traditions of the Second Male Middle and Secondary Kołłątaj School founded in 1921 and located in the same building since 1927. The building was designed by Tadeusz Szanior. It has two adjacent buildings with living quarters and the gym. At the time, it was one of the most modern buildings in pre-war Warsaw.

The school building was erected during the years 1925-1927. During the Second World War, Warsaw was destroyed by the Nazi occupants. In 1943, after the Warsaw Ghetto uprising, the main part inhabited by the Jewish community was almost completely demolished. In 1944, after the Warsaw Uprising, further parts of the city were ruined. The school is one of few surviving public buildings. The only part that was destroyed was the top floor that has never been rebuilt.

The walls of our school and this hall in particular, have witnessed a lot of tragic events, especially the events of 1944. The building was used as gendarmerie headquarters and during the Warsaw Uprising, in 1944, the building was occupied by the soldiers of RONA (Russian National-Freedom Army) who had been recruited entirely from Russian prisoners of war and used to suppress the uprising. In this area, there was also an SS unit operating under the command of Oskar Dirlewanger and recruited from dangerous criminals. Even their German commanders didn’t dare to give guns to most of them. The school with the surrounding area of the present market was turned into a makeshift prison for the local people. Many of the school teachers and students took part in the resistance and secret lessons. Władysław Malczewski, a history teacher and headmaster of the school during the years of 1921-1937 died in the Warsaw Uprising. Józef Miernik, a mathematics teacher and the headmaster during the years of 1937-1943 was shot in a public execution in 1943.

Right next to the school building, on the other side of the sports field there, is a house where Irena Sendlerowa used to work. Irena Sendlerowa, who died in 2009, was a Polish woman who saved a great number of Jewish children during the Nazi occupation. Under the cover of social work and with the cooperation of The Polish Underground State and Catholic Church, she led 2,5 thousand children out of the ghetto. Caught by the Germans in 1943, she was tortured and sentenced to death. She managed to escape by bribing the guards. In 1966, she received the medal from the Yad Vashem institute for the Righteous Among the Nations.

In 1983 she planted a tree in the Garden of the Righteous Among the Nations In February 2010, a plaque commemorating Irena Sendlerowa was unveiled on the building she had been working in. Our school is looking after the commemorative plaque and keeping the memory of Sendlerowa alive.

It witnesses all important events of the school community and is the symbol of the school identity and ideas that we live for. Embroidered around the burning olive lamp, there is a quotation of Hugon Kołłątaj, the patron of the school: “The human and his happiness – Motherland and her integrity”. The banner shows the goals of the school, which are: to expand knowledge and create attitudes that will enable students to fulfil the needs of the society and follow their own innovativeness. The banner came into being on the 50th anniversary of the school founding in 1971 and was funded by the Parents Association and Welfare Company – Transportation and Trans-shipment Cooperative “Warsep” from Okęcie. It was made by the Resurrection nuns based on the project of Irmina Korpus. The quotation of Kołłątaj was chosen by the contemporary headmaster Bolesław Szcząska and a historian Ryszard Czaplicki. In 1995, the crown was addend to the national emblem.

May 12, 2011 was the third death anniversary of Irena Stanisława Sendlerowa.

On the third death anniversary students of our school have laid a wreath and lit the candles at the commemorative plaque of Irena Sendler on building at Pawińskiego 2 once again. 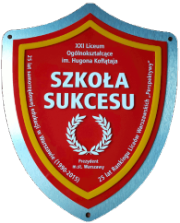